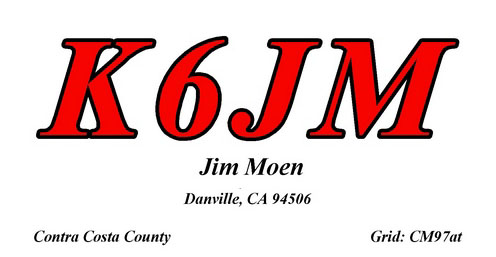 You've stumbled onto Jim's website, where I highlight two of my hobbies --- Ham Radio and showdogs.  This page is about my radio stuff, telling how I got into all this, left the hobby for many years, and returned.  The Barney page and Agility page are about my showdog Barney.  The Kiro page is about our great friend who is now gone.  The D-Star Menu page is about my favorite Digital Voice mode, and HamNotes by Jim is my sometimes blog.

Back to Ham Radio, or Click here to skip past the technical stuff.

I'm an Amateur Radio Operator, licensed by the Federal Communications Commission.  In 2006, after quite a lot of study about electronics, radio, propagation, as well as various rules and regulations, I was able to pass the test to earn the highest level of Amateur Radio license -- Extra Class.  But in 1959, I got started by passing the test for Novice class, and got on the air with a Collins 75A-2 receiver and WRL Globe Chief Deluxe CW transmitter. 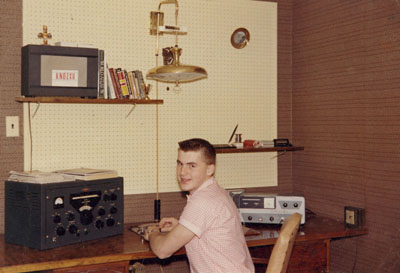 I upgraded to a General class license in 1960, adding a screen modulator and VFO for AM phone. I then traded for a Collins 75A-4 and got a Central Electronics 100V transmitter, using a Mosley TA-33 Jr beam and a 40 meter folded dipole.

I was an active Ham through the 1960s, but my career in computers took over and unfortunately in 1970 I let my license expire.  Finally, in mid 2003, I re-tested for General and got back on the air.  I've put together a new station -- at home it's a Kenwood TS-2000, sometimes with an Ameritron ALS-600 amp. I enjoy both SSB and PSK31.

In 2010 I got into DV -- digital voice, starting with D-STAR.  I marketed and supported a GMSK hotspot modem between 2011 and 2016.  Currently I have 4 hotspots in the shack, and even though two of them can handle multiple modes, each is dedicated to a single mode:

I've done some low power/QRP with a Yaesu FT-817, focused on SSB and PSK31 (using the NUE-PSK digital modem).  I particularly like QRP in the field, and for that I use the Pacific Antenna PAC-12 portable ground-mounted vertical.  The entire station with battery fits in a small case.

I now have 4 functioning HF stations in the shack: 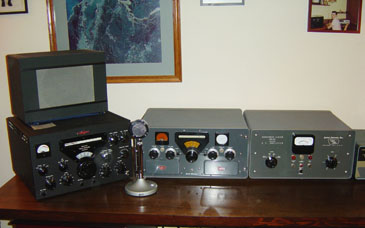 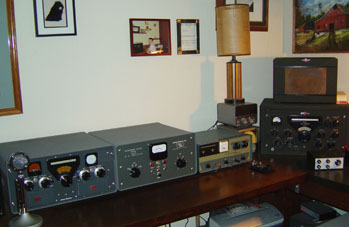 I am not a contester, but I enjoy a little HF DX when I hear it and am able to work it.  I am also re-learning my CW skills. I've done a little satellite work and would like to learn more. When I get more time, I'd also like to get into ATV.

Non-Technical Stuff
My other hobby is showing my dog (Hungarian Puli sheepdog). I find there's almost no cross-over of interest among people in each of these hobbies, which maybe is good!

Elmers
New Hams have often been lucky to have been helped by older Hams who encourage and teach them about amateur radio.  We call this person an Elmer.   But I've had an unusual Elmer -- a friend my age I've known since elementary school.  Now, I did have a natural interest in electronics.  I built a crystal radio from a kit, and I still have an inspirational article about short wave radio from a Boys Life magazine in 1953 when I was nine.  But in what we called Junior High School (middle school), my friend told me about the new Citizens Band service on 11 meters.  We both got Heathkit CB-1s and built them.  Tom showed me how to "homebrew" a quarter wave vertical out of conduit pipe, aluminum wire for the 4 radials, and plywood for the base.  CB hadn't been discovered by the public yet, so the channels were quiet.  We convinced a non-technical friend to build a CB-1 (he didn't enjoy that much) and the three of us used CB as a kind of intercom while we did our homework on school nights.  This was during one of the great sunspot cycles of the last 100 years, and that winter I would hear and talk to stations 1,500 to 2,000 miles away, using 2.5 watts of AM phone.  So I developed some early QRP experiences without really thinking about it.

Tom moved on to ham radio, studying for the FCC tests to get his Novice, followed by his General class Amateur Radio license, and he encouraged me to do likewise. So I thank KT0M, which is now his call, for Elmering me back in those days in north central Iowa.

I sometimes talked to Tom from our club station during the college years,  but when I got out of school, my interest in Ham Radio was supplanted by work.  I did see my friend at High School reunions every 5 years.  We had both retired by 2003 when I had lunch with him on a visit back to Iowa.  As we left the restaurant, Tom gave me a demo of the mobile Ham rig in his car.  He had remained active all those years.  It was during that lunch, but especially looking at his mobile rig, that I silently told myself it was time to get back to Ham Radio.  Two months later, I had a General license again.

I've also been helped by others, most notably K0TMU.  I didn't really know Warren back in the early days, even though he lived in my home town.  I have an old logbook that shows I talked to him at least once.  Since meeting him in 2003, I got to know him and talked to him regularly about Ham Radio and about life.  Warren was in his 80s, but continued to learn new technologies and try new things.  He is my model of how I want to live as I get older.  Warren is a Silent Key now, and like a lot of Hams who knew him, I miss him.

Finally, my father deserves special mention.  He ran a successful construction company, building commercial buildings, schools and churches.  His hobbies were his family, politics, economics and reading in general, but not electronics.  Yet he supported my interest in radio, and somehow I convinced him to study for the Novice test when I did.  He was smart, but it is not easy to learn CW morse code when you aren't interested.  Yet he did, and I remember the two of us taking the test together in 1959.  His call was KN0ZXT.  He didn't want to get on the air, given his weak code skills, but I convinced him to get on the air once or twice.  I remember his first QSO, and like all of us during our first morse code contact, it was difficult and tense.  But he did it, and I was so proud of him to have done all that to show support for his son's hobby.

Vanity Calls
The new vanity call system is wonderful, and I've made use of it 3 times.  But I don't think I've abused it.  In 2003, after re-testing for Tech and General, I was assigned the call KG6RTG.  I immediately researched if there was a way to get back my old call.  The old callbooks showed it had never been assigned to anyone else, and the vanity system allows anyone to request an available call for which they are eligible, so in 2003 I again became K0ZXU.  After I upgraded to Extra Class in 2006, I searched for a shorter call and found K6XZ.  I liked it since it retained two of the more unusual letters from my old call.  But I really hoped to find a call that had the initials of my first and last name, and in 2009 I was lucky enough to find that K6JM was available.  My thanks to Mike Carroll N4MC for all the educational info about vanity call procedures. 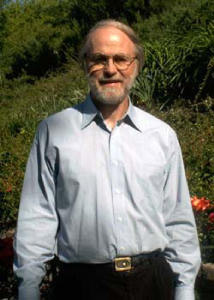 I was off the air for over 33 years, but I'm back and very happy to be having fun again with this great hobby. 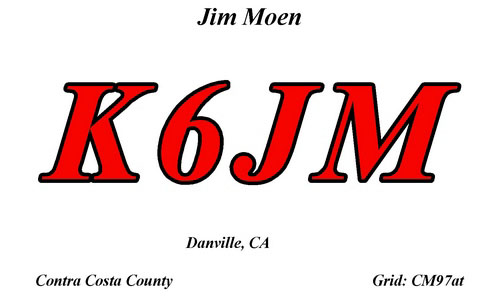