Larry WW6USA pointed me to a very small DMR HT made by Zastone.  It was endorsed by Don WB5EKU who found it’s a great backup DMR radio to access a hotspot* around the shack or property. 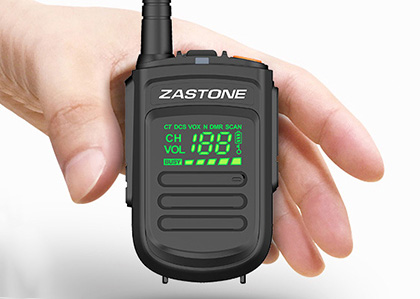 This little HT’s main selling points are its small size and sturdy construction, but I have to say I am also impressed by the LED display that’s hidden behind the plastic case.   The radio has two important features that are missing, but for me, the small size and neat design more than offset what’s lacking.  On eBay, the prices seem to range from US $53 to $60.

The radio is a mere 90mm x 61mm x 30mm (3.4″ x 2.4″ x 1.2″) in size and weighs only 135g (4.8oz) without the removable antenna.  The small size and light weight are the reasons I got this radio.  I can slip it in my pocket, use the included belt-clip or if I were the type, I could wear it around my wrist using the included lanyard (I’m not).  Its 2 watts at high power more than covers my property inside and outside and it has no problem picking up my 10 milliwatt hotspot. So while I do have a large and more robust DMR HT, I am finding I prefer to use this little one around the house.

Now, the drawbacks — by far the biggest issue is that it listens and transmits on both timeslots at the same time.  This means it will not work with a DMR repeater nor with a duplex hotspot that is configured to use both timeslots.  This clearly was a design decision to reduce manufacturing cost.  But I deliberately use simplex hotspots which, on DMR, use only one timeslot.  So this “feature” of the Mini9+ is no problem for me.

The other drawback is that the screen displays the channel number and cannot display a channel name.   At home, I usually use just a few channels set up for my favorite talkgroups, so this is not a problem, and I have printed a list showing all channels and their talkgroups.

In keeping with the small size, you can set up a maximum of 128 channels and only 64 contacts.  Yes, on larger HTs I like to load Contacts with all the ids and callsigns in the world so I can see the ham’s callsign on the screen, but that is not needed with this HT.  I have not found the small memories a problem, given the way I use this radio.

Bottom line — these deficiencies don’t stop me from enjoying the radio and I do love its small size.

As my 7th grade English teacher used to say, “it’s cuter than a bug’s ear.” 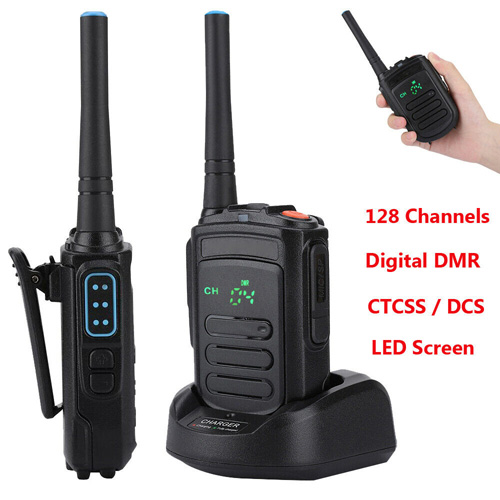 PS To program this HT, you can use any of several programming cables.  I found the cable that works with my old BeoFeng UV-5R analog HT also works with this radio, but a new cable costs about US $9.  Just search eBay for”USB Programming Cable For Zastone Mini9″.

PPS While the free programming software from Zastone’s site is similar to all other DMR radio programs, I must admit that I normally do not specify an RX Group list.  Yes, I know, some people like to monitor various talkgroups at the same time, and some setups will transmit error messages on a special talkgroup.  But I generally don’t fill in the RX Group list field.  That won’t work on this radio.  You will probably set up a list with all the TGs your channels refer to, or I suppose you could set up a different list for each channel with just the one TG.  But this radio will not let you hear a TG unless it is in the RX Group list for that channel.

*These days, so many people who want a digital voice hotspot use some form of multi-mode hotspot.  I am partial to those inspired by Jonathan G4KLX and designed by Jim KI6ZUM.  I have two right now — One is a ZUMspot with a 10 milliwatt RF chip on it.  The other is an MMDVM modem that drives my old Kenwood D700 set to output about 5 watts on UHF.  But that is another story….