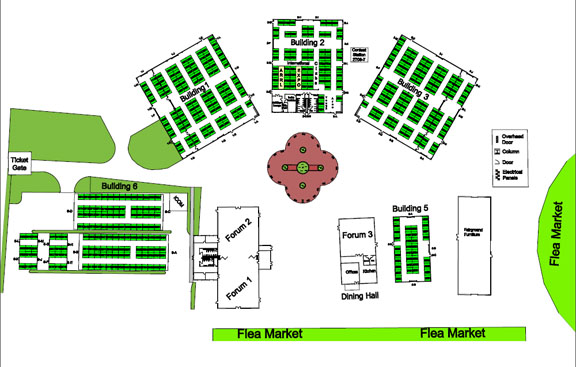 Dayton Hamvention 2017 — I believe the Dayton Amateur Radio Association pulled off an incredible feat of project management and it was a wild success.  They had only 9 months to lock in a new site, work out all the logistical details and manage 650 volunteers.  It basically went off without a hitch.

OK, the first morning, there were some traffic problems.  At the old Hara arena, it took me 10-15 minutes after parking to be at the Hamvention site.  The first day at the new site, it took me 35 minutes.  I kind of think the extra 20 minutes I experienced were not a big deal.  I had, after all, allocated the entire day to the Hamvention experience.

The Forums, as usual, were varied, fun and full of good information.  When sitting in a Forum session, it felt the same as the previous 13 Dayton Hamventions I have attended.  But step outside, things were a lot better than before.

In my opinion, the food was better than anything at the previous site.  I think there were more people attending, but there was more space in the aisles and I felt less crowded.  There was a central meeting area that felt like I was attending a local county fair.  Moods were good all around.

There were a few thunderstorms – it always rains a bit at the Hamvention, but I happened to be inside every time so that was not a big deal for me.  I would say I had to do more walking, not a lot more, but it was a bit harder to get to the Flea Market.  The biggest complaints about the new site will probably come from the Flea Market vendors.  They were on grass, not asphalt as before, so the rains produced some mud and probably limited customers after the short rains.

Everywhere, there was the spirit of trying to make things as good as possible for the customers, while, at the same time, thinking how to improve things for tomorrow and next year.  As an example, besides parking at the site, DARA and and the town of Xenia provided four other off-site locations for parking, with (free) school buses shuttling back and forth all day.  I chose to park at the Greene County Service/Engineering Complex. That first morning, the supervisor of the bus drivers was greeting all us attendees, making us feel at home in Xenia, but she was also monitoring and recording every bus trip, the timing, everything.  She said they wanted data to be able to improve things.   And they did, the very next day.  Most of the Friday issues were improved by Saturday.  That kind of attitude — teamwork, gather facts, analyse, fix — was evident throughout the 2017 Hamvention.

Hats off to DARA, to General Chairman Ron Cramer, KD8ENJ, and to Assistant General Chairman, Jack Gerbs, WB8SCT, and all the volunteers for making this a successful and enjoyable Hamvention!